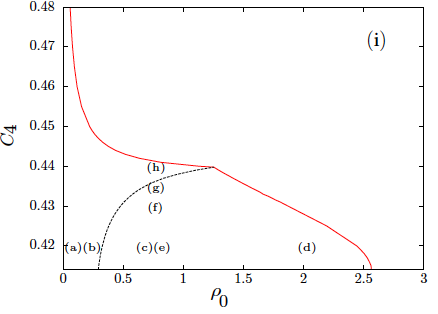 We investigate the liquid state structure of the two-dimensional (2D) model introduced by Barkan et al. [Phys. Rev. Lett. 113, 098304 (2014)], which exhibits quasicrystalline and other unusual solid phases, focussing on the radial distribution function g(r) and its asymptotic decay r $latex \rightarrow$ 1. For this particular model system, we find that as the density is increased there is a structural crossover from damped oscillatory asymptotic decay with one wavelength to damped oscillatory asymptotic decay with another distinct wavelength. The ratio of these wavelengths is 1:932. Following the locus in the phase diagram of this structural crossover leads directly to the region where quasicrystals are found. We argue that identifying and following such a crossover line in the phase diagram (dashed line in figure above) towards higher densities where the solid phase(s) occur is a good strategy for finding quasicrystals in a wide variety of systems. We also show how the pole analysis of the asymptotic decay of equilibrium fluid correlations is intimately connected with the non-equilibrium growth or decay of small amplitude density fluctuations in a bulk fluid.